Cypher Avenue gives a recap of LHHH for Filth….. I Live!

So, I’m going to take a break because the Co-Founder of Cypher Avenue said it all for me. I’m just gonna give you the Teas as he poured them.

I don’t think I’m your typical reality television fan. The reality tv I watch are shows like the award winning No Reservations with Anthony Bourdain, Bizarre Foods with Andrew Zimmern, Paranormal Witness or River Monsters. I know some may have never heard of these shows nor would consider them reality tv in the popular context but to me they fall in that category. On the other hand, I feel like I’m allergic to the more popular, ratings grabbing, gossip blog, manufactured drama, messy, world-star-hip-hop-esque reality television shows. I avoid them like the plague. I have seen maybe 2 episodes of the first season of Real House Wives Of Atlanta. A show where many of the women aren’t wives; others like Basketball Wives, Love and Hip Hop Atlanta or Hollywood, Bad Girls Club, etc. are all cut from the same cloth…scripted drama with a dash of reality.

Even though I didn’t watch the full episodes, I have viewed clips of RHOA where there were gay characters being featured. Seeing the characters, I felt deflated. More of the same; which were effeminate men shown as being accessories to the female leads on the show. This wasn’t surprising in that historically, masculinity is something that is often excluded on television shows where same gender loving black men are featured.

As co-founder of this site (which is more focused on the masculine leaning homosexual men of color) the founders have to keep our “ears to the street” sort of speak to the current happenings within the culture and community. Our reviews, discussions and commentary on LGBT films, short stories, web series, music and television characters of color, have garnered both positive and negative reactions.

There are times (like now) when black gay internet will cause me to check out a show, just to see what the hype is; in addition to, readers wanting the “Cypher Avenue” opinion. Previously this lead me to do a review of the much talked about Prancing Elites reality show from earlier this year. Even though I didn’t complete the season (you know, the whole aversion to reality tv thing), I viewed enough to give an honest review. Now I’ve done the same for the story arc on Love and Hip Hop Hollywood featuring Milan Christopher and Miles Brock.

I would like to point out my viewing came after hearing about the “positivity” concerning the gay/staight love triangle on Love and Hip Hop Hollywood that proceeded the Out In Hip Hop VH1 special and the overall message of “living in your truth” (thanks Iyanla). What I always find interesting is that there is (and I assume will always be) a large portion of the reality tv viewing public that will believe these shows are just as real as the found footage films The Blair Witch Project or the first Paranormal Activity.

After 30 minutes of viewing the first episode of LHHH which had an over abundance of bad attitudes, over acting, hyper sassiness, goose necking, stereotypes and enough weave to make Rapunzel give a side eye; I decided just to fast forward to the gay story-line within each available episode and save myself some headaches.

Milan and Miles are in a relationship and are both aspiring rappers/musicians. Brock’s is best friends with his high school sweetheart and ex, Amber. Even though Amber and Miles haven’t been together in years, she is holding on to the idea that she and Miles will be together.

Back in August, I (like with most on social media ) had no idea who gay rappers Milan Christopher or Siir Brock was. These were not the gay rappers I’m familiar with like Last’O, Bryant, Earth Tone, Siya, Fly Young Red or Kaos. After doing a quick internet search, I saw Milan’s music video and recalled receiving a message/press release requesting Cypher Avenue to do a review. In addition, I came across a voyeuristic recording featuring Milan and a male companion having sex. Well, we all got a past and no judgments here. Nonetheless, I must say this all came off as if someone who will stop at nothing to become “famous”, attempting to follow a Kim Kardashian model of celebrity stardom. I then seen that Milan is the nephew of legendary music producer Berry Gordy…interesting.

It seems like Down Low-ism as it relates to the African American community in media just isn’t going to ever go away. This trope appears to be as fascinating to black women and some fem leaning black gay men as UFOs are to UFO researchers. In this context, it looks as if or is implied that Miles may still be sexually involved with Amber. Think about it, what woman would be waiting years for a man to make up his mind if sex wasn’t involved. Women have needs too right? Even if sex wasn’t involved (reflecting about it, I don’t recall an on screen kiss shared between the two), it still plays into what I feel is a sexist stereotype of a man stringing a woman along emotionally. All the while we have the proud, out and open Milan who pushes Miles Brock to be the same.

As an almost 40 year old man, I have literally seen and read this exact same story line as it pertains to black gay story lines in media for almost 20 years. In the aspect of “reality”, yes it exists but how is this progression if these images and stories are recycled over and over again?

Side note* Word to the wise gentlemen, if you meet a closeted man and decide to date him, please don’t pressure him to come out. This is not your decision and everyone’s reality and circumstances are different. If you don’t want the hassle and frustration of not being able to be open or seen within the relationship…then save yourself some time and only date an open and out gay man.

These next few “negatives” could potentially be viewed as positives. For example the producers of the show really used social media to its advantage by creating controversy before the show even aired. Supposedly some of the show’s “straight” male stars didn’t want to be seen on camera with nor have their story lines commingled with the GAYS. This was somewhat verified by the show’s “hasn’t had a hit in years” star Omarion who stated “keep that shit out of my muthafuckin story line.” All the social media trending hype was gold for the show.

Something else that I observed; if you need to learn how to properly throw or dispose of a drink, these shows are a great resource tool. As I fast forwarded through the episodes, there were so many “drink throwing” incidences that is was unbelievable. Like check out this scene between two random male and female light skin divas.

The random drink toss-age was almost non-stop, like when Brock storms out of Milan’s apartment free of the belongings and car keys he came in with (yeah this is “reality” my ass). 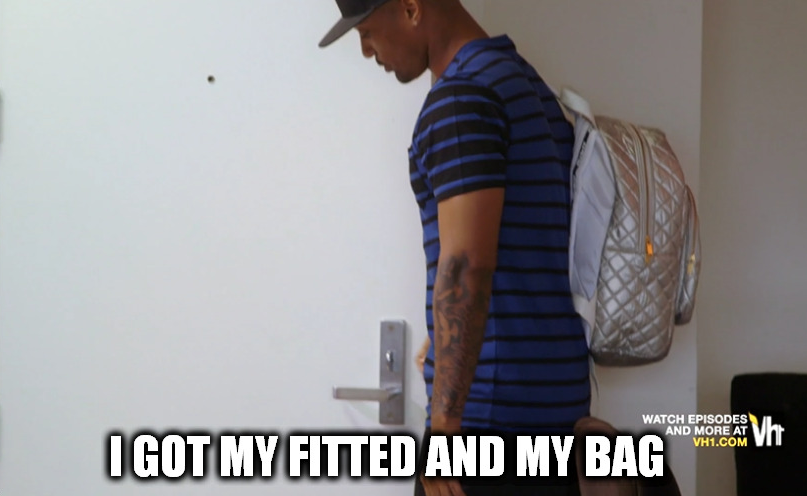 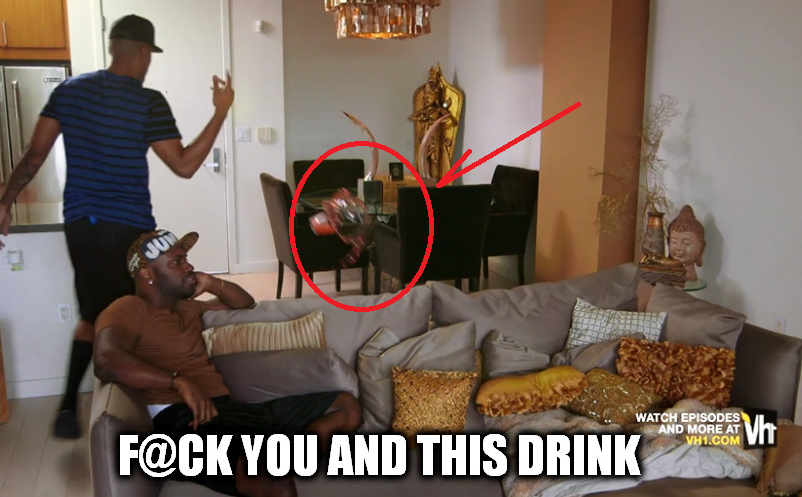 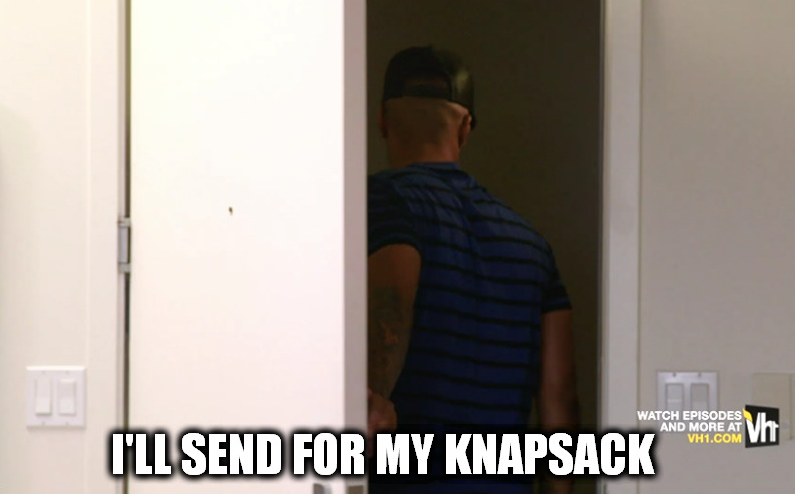 Basically the producers said “We need more fabulous sassy drama. Please make sure we get a random drank being tossed in this scene. Thanks everyone…and ACTION.” Look, me and my dude been together going on 7 years and when we were dating and had an argument, I could not conceive of doing something this disrespectful. Who the fuck does this bullshit in real life?

Shows like RHOA and LHHH are great informational programs on how NOT TO begin, be in, conduct yourself while in and or how to get out of a relationship. If you see something done within the confines of a relationship on a reality tv program, there is a 97% chance you should do the complete opposite in your real life. For instance, Milan putting his personal relationship business on social media after getting matching tattoos with Miles. 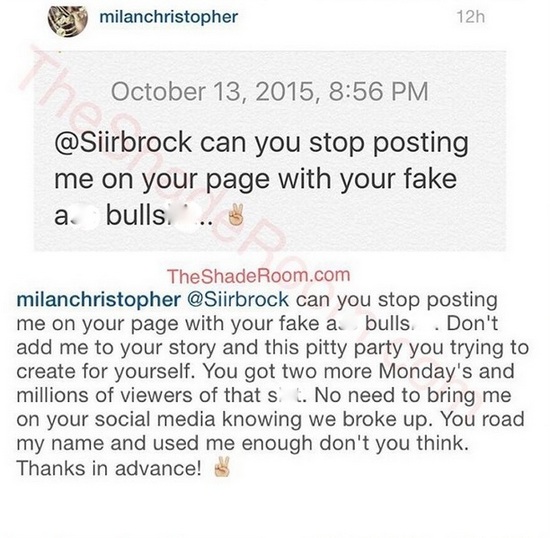 In all fairness (trendy fashion fads and chance tattoos aside) Milan and Siir Brock are a bit of a break from the norm. Here we have two masculine leaning African American men in a relationship starring on a television program in the main cast. The last time this happened to my knowledge, scripted or otherwise (please correct me if I’m wrong) was with Tariq and Kaldrick on the LA Complex. Regardless of the strides with same gender loving men of color who are featured on television, they’re usually created and placed within an interracial relationship.

Before you read too deep into this statement, I fall into the “love is love” crowd but one can’t ignore the interracial dominance on television when LGBT coupled characters of color are featured.

I think it goes without saying, Brock coming out to his ex and friend Amber in addition to coming out to his family in the episode titled Truth, is the biggest positive in this story. In many of life’s circumstances… honesty (not only to you but to your love ones) is always the best policy. LHHH and VH1 turned this whole event into a media publicity blitz with Milan and Brock as the spokesmen leading up to VH1’s Out In Hip Hop special. They even had Brock do a PSA (Public Service Announcement) for LGBT individuals who may need help navigating their personal process. I think one would be hard pressed to find aversion with the mantra of “Living In Your Truth” (thanks again Iyanla).

Now that the cat is out of the bag and all the closeted homosexual skeletons are free, I can only imagine the scenarios the producers will have to create for season 3 concerning Milan and Miles. Something tells me this duo may be headed for some cheating, threesomes, open relationship or homophobia type drama…because you know…a homosexual relationship featuring men of color on a reality cable television program will still need to tow the stereotypical line.

Oh damn…they beat me to it. I guess they’re not waiting until next season. 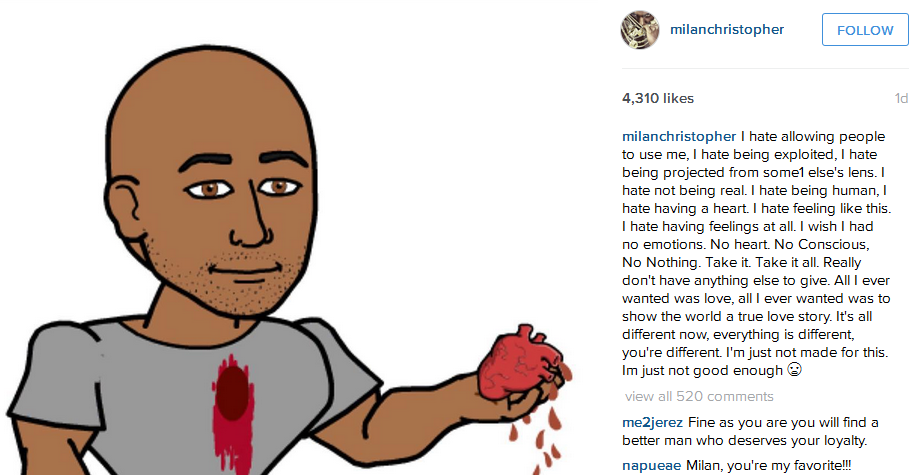 Source: Cypher Avenue
Now that he has said it can I just say that Aggy and Maggy still annoy me????? I need to have a talk with them… Ohhhhhhhhh Milan…….

When it comes to the Name DiamondKesawn, it truly speaks for itself. Born Kesawn Cooper, in conjunction with the fact that he is known to be a girl's Best friend aka Diamond; you get the Birth of DiamondKesawn.The Self Made Media Socialite is dedicated to the continued Growth and the Development of himself, DKP the Brand, RAmag, and the Brands of those he will touch.Buckle your Seat Belt as it’s always a Roller Coaster Ride with DiamondKesawn. #MindYou
Related ItemsaffairArtistAtlantaCypher AvenueDiamondKesawnEditorialexclusiveFashionfilmgayGossipindielgbtLHHHlifemagazineMediaMilan Christophernew releasepartyprideRAmagRaynbow AffairraynbowaffairrealReality Messreality tvReleaseSir BrockTea
← Previous Story DawgPoundUSA has Spoken…. Yusuf lied! (Shocking)
Next Story → Paint Me Pretty by Catherine Argabright