You’re Invited to A “Grande” Event 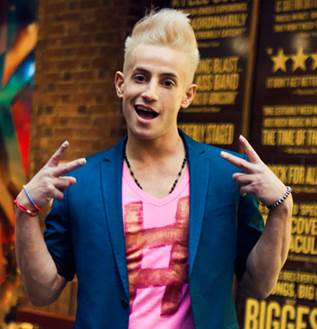 Get READY as Oxygen Media is exploring the good, the bad and the most outrageous moments on social media during the new half-hour special, “WORST.POST.EVER: With Frankie Grande,” premiering on Tuesday, August 18 at 10pm ET/PT. Hosted by YouTube sensation, “Big Brother” fan favorite, and Broadway star Frankie Grande, the special follows Grande as he breaks down the buzziest online posts, tweets and selfies from Instagram, Facebook, Twitter, Tumblr and everything in between. For a candid look at Frankie, please visit: http://www.oxygen.com/season/blogs/worst-post-ever-with-frankie-grande-premieres-august-18

“I have always dreamed about having such a great platform where I can share all of my sparkles and talents,” Grande said. “It is going to be BIG energy and will sweep you away, crying tears of laughter and delight! I’m going GRANDE and I’m so happy I get to take you all with me! I. Can. Not. Wait.”

During the special, Frankie will also craft and execute his own set of extreme social media experiments, outrageous sketches and edgy segments involving viewers from across social media platforms. Additionally, fans will have the opportunity to drive the conversation faster and further by using the hashtag #WorstPostEver on Twitter.

“As his millions of followers will attest, Frankie’s straight-forward, unapologetic, and larger-than-life personality makes him the perfect host to explore the outrageous world of social media with viewers,” said Cori Abraham, Senior Vice President, Development and International, Oxygen Media. “’WORST.POST.EVER: With Frankie Grande’ taps into the social habits of our highly engaged audience and offers them an interactive opportunity and fresh perspective of this hilarious and sometimes hijinks topic.”

When it comes to the Name DiamondKesawn, it truly speaks for itself. Born Kesawn Cooper, in conjunction with the fact that he is known to be a girl's Best friend aka Diamond; you get the Birth of DiamondKesawn.The Self Made Media Socialite is dedicated to the continued Growth and the Development of himself, DKP the Brand, RAmag, and the Brands of those he will touch.Buckle your Seat Belt as it’s always a Roller Coaster Ride with DiamondKesawn. #MindYou
Related ItemsDiamondKesawnFashionfilmFrankie GrandieGossipGrandelgbtLovemagazinenew releaseOxygenRAmagraynbowaffairSocial MediaTruthvideoWorst Post Ever
← Previous Story Atlanta: The LGBT Artist Takeover
Next Story → Beyond The Stands 2015