‘Black Enough Man Enough’ by Gee Smalls is Out Now 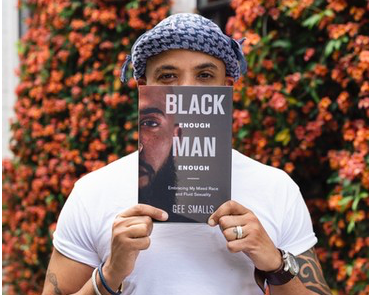 I have been counting down the days and FINALLY the time has come! ‘Black Enough Man Enough’  is Out Now and Gee Smalls is the talk of the town and social media.

A coming of age story on my experiences of love, sex, and family, exacerbated by living at the intersection of being biracial and bisexual. ‘Black Enough Man Enough’ is a labor of love and he couldn’t be more proud to share his story.

“I knew I was different, called ‘faggot-ass half-breed,’ teased for my light bright skin, soft curly afro, freckly face, and feminine ways.  Growing up the child of a black daddy and white momma in the black Gullah Geechee culture on James Island, South Carolina in the 80’s, I was an outsider.

“My adolescent identity crisis of racial and sexual confusion lead to a trip down the aisle with my high school sweetheart, the joy of fatherhood, and then into the shadows of the down-low before divorce and a tumultuous custody battle.  As I embraced all of who I am, I developed my voice, using it to speak out on the racial and LGBT equality movements, as well as to say ‘I do’ to marry the man I love and create a realistic 21st century blended family.”

Get your copy on Amazon, Apple Books, or download on Kindle.

When it comes to the Name DiamondKesawn, it truly speaks for itself. Born Kesawn Cooper, in conjunction with the fact that he is known to be a girl's Best friend aka Diamond; you get the Birth of DiamondKesawn.The Self Made Media Socialite is dedicated to the continued Growth and the Development of himself, DKP the Brand, RAmag, and the Brands of those he will touch.Buckle your Seat Belt as it’s always a Roller Coaster Ride with DiamondKesawn. #MindYou
Related ItemsBlack Enough Man EnoughDiamondKesawnGee Smallsraynbowaffair
← Previous Story Big Freedia: God Save the Queen Diva
Next Story → Mike Hill debuts his New Memoir “OPEN MIKE”