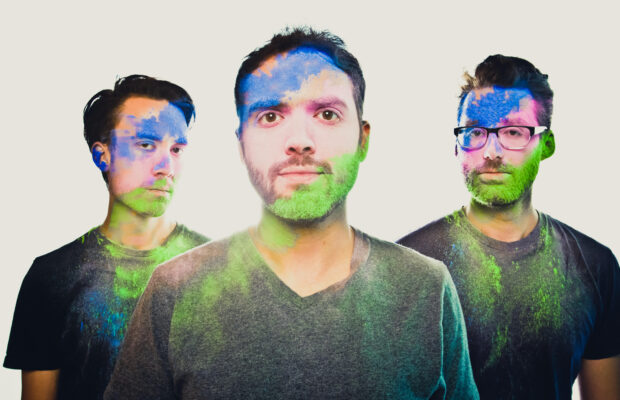 Jimkata is a three-piece anthemic, synth-washed, electro-rock band based out of Ithaca and Los Angeles. With a triumph of swirling analog synths, infectious pop hooks, and candid lyrics, Jimkata has built a distinct sound that has been resonating with listeners across the country.

Friends since middle school, Evan Friedell, Aaron Gorsch, and Packy Lunn infuse Jimkata, (named after the so-bad-it’s-good 1985 gym-fu caper Gymkata) with both an adventurous musical streak and relatable lyrical themes. Mixed in with the modern synth sensibilities and hard-driven indie rock are influences drawn from the likes of Motown, singer-songwriters like James Taylor, and even old country songs, where storytelling and a quick turn of phrase share priorities with melody and the beat. Jimkata has concocted an unusually rich and rewarding mix and one that’s evolved naturally.

After taking a two and a half year hiatus following the release of six studio albums and the successful building of a vibrant, grassroots fanbase, Jimkata is preparing to release their next album, Bonfires. The 10 track album is set for release as a series of singles every month with accompanying visuals and merch line. Thematically, Bonfires touches on poignant themes of uncertainty, being in limbo, and looking for an anchor of hope in these trying times.

Leading single “Wanna Go” narrates the negative effects of social media and how it can make you feel insignificant. It’s about perception versus reality in a time when we are flooded with everyone presenting an idealized image of themselves and their lives to the world. The trio explains, “It took on an extra layer of meaning for us after the pandemic began and we all started quarantining, stuck in our houses and apartments, staring into our phones, longing for a different world and becoming overly acquainted with our immediate surroundings.” Quirky melodies and funk-fueled basslines provide the backdrop for their layered harmonies, emitting a summery, feel-good sensation.

Then there is “Wait for You”, a song stemming from a moment of accidental experimentation on an old drum machine. Sonically the song features delicate synths and fast-paced beats, highlighting the band’s charismatic songwriting. Touching on the feelings of being dejected and the unknown of what the future holds Friedell shares, “I think a big theme of the album is that feeling of being in limbo – sitting around waiting and feeling restless while navigating uncertainty. That’s something that I think we all experienced individually once the band decided to take a break. This is that feeling seen through the lens of a relationship.”

Title-track “Bonfires” is about the vulnerability you feel when facing uncertain times and the reflexive tendency to seek out the comfort of nostalgia that happens as a result. Friedell confides, “The past few years under this presidency have felt like dropping off into a deep, dark, and ugly abyss from which there may be no return. It is easy to long for simpler times where you felt more sure of things. Though the idea that times were ever simpler may be an illusion unto itself. And so we find ourselves having to find the courage to face the flames, move through the ugliness, and hope it’s just a painful transition towards a better world.” “Bonfires” is a prime example of the band’s musical ethos, delivering a bold and colorful anthem with entirely relatable lyrics.

When it comes to the Name DiamondKesawn, it truly speaks for itself. Born Kesawn Cooper, in conjunction with the fact that he is known to be a girl's Best friend aka Diamond; you get the Birth of DiamondKesawn.The Self Made Media Socialite is dedicated to the continued Growth and the Development of himself, DKP the Brand, RAmag, and the Brands of those he will touch.Buckle your Seat Belt as it’s always a Roller Coaster Ride with DiamondKesawn. #MindYou
Related ItemsJIMKATA
← Previous Story Joy Denalane Releases the Visual to “Be Here In The Morning” ft. C.S. Armstrong
Next Story → Queen Naija “Pack Lite” (Alternative Video)