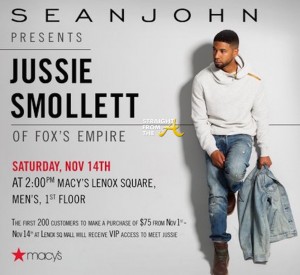 In light of Sean John’s ‘Dream Big’ Campaign, which features young influencers living out their dreams far beyond limitation, the brand partnered with the Boys and Girls Club of Atlanta in selecting ten deserving kids to meet the campaign star.

Smollett, who truly exemplifies the meaning of the ‘Dream Big’ concept through his many accomplishments, presented a check to the organization to further support their efforts.

Also during the event, Atlanta’s City Councilman Kwanza Hall presented Smollett with a proclamation to the city of Atlanta (one of the highest honors presented to esteemed residents and visitors to the city).

When it comes to the Name DiamondKesawn, it truly speaks for itself. Born Kesawn Cooper, in conjunction with the fact that he is known to be a girl's Best friend aka Diamond; you get the Birth of DiamondKesawn.The Self Made Media Socialite is dedicated to the continued Growth and the Development of himself, DKP the Brand, RAmag, and the Brands of those he will touch.Buckle your Seat Belt as it’s always a Roller Coaster Ride with DiamondKesawn. #MindYou
Related ItemsaffairArtistAtlantaBaltimoreDCDiamondKesawnEditorialexclusiveFashionfilmgayJussie SmollettlgbtlifeLoveLyricsmagazineMediamusicNew Musicnew releaseNicki Minajnycpartyprider&bRAmagraprapperRaynbow AffairraynbowaffairRealityreality tvReleasereviewSean JohnTruth
← Previous Story Take a trip with me to TifTown, the Town of Many Things
Next Story → What is a “uni-boob?”